It is hard to believe that we are at the third book in the Kai Gracen series. Black Dog Blues was one of the first full-length novels I’d written inside of an urban fantasy genre I’ve always wanted to explore. The best part about writing Kai Gracen is creating not just the personalities but also the world they inhabit and it’s been great to blend in the fantastical with the mundane.

In his third outing, Jacked Cat Jive, Kai is faced with unique challenge of realizing he really is not as human as he thought and that the Court and its inhabitants mean something to him other than a thorn in his side. And of course, there is always Ryder, the Sidhe Lord who gets under his skin in the best of ways. I’ve enjoyed writing the push and pull of their relationship but also the growth between them as characters. They started off at very different points of view and are slowly working towards an understanding while also fending off any challenges that come at them.

This time out, Kai is not only set to rescue a group of refugees from the Badlands beneath San Diego, he also has to come to grips with his growing friendship with Ryder and how the humans in his life are getting older, something he won’t experience himself for quite a long time.

So I hope that you join Kai and his next adventure and also enjoy this serialized story of Ryder and the trouble he gets into when he doesn’t listen to what Kai says.

Also, I invite you to enter the giveaway on each of the blogs during the tour and get a chance to win a $25 USD gift certificate from an e-tailer of your choice. 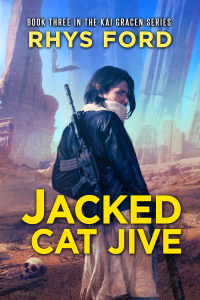 You can purchase Jacked Cat Jive at:
DSP Publications:
Amazon:
And other places books are sold.

Blurb:  Stalker Kai Gracen knew his human upbringing would eventually clash with his elfin heritage, but not so soon. Between Ryder, a pain-in-his-neck Sidhe Lord coaxing him to join San Diego’s Southern Rise Court, and picking up bounties for SoCalGov, he has more than enough to deal with. With his loyalties divided between the humans who raised him and the Sidhe Lord he’s befriended and sworn to protect, Kai finds himself standing at a crossroads.

When a friend begs Kai to rescue a small group of elfin refugees fleeing the Dusk Court, he’s pulled into a dangerous mission with Ryder through San Diego’s understreets and the wilderness beyond. Things go from bad to downright treacherous when Kerrick, Ryder’s cousin, insists on joining them, staking a claim on Southern Rise and Kai.

Burdened by his painful past, Kai must stand with Ryder against Kerrick while facing down the very Court he fears and loathes. Dying while on a run is expected for a Stalker, but Kai wonders if embracing his elfin blood also means losing his heart, soul, and humanity along the way.

Follow the rest of the Jacked Cat Jive Tour! 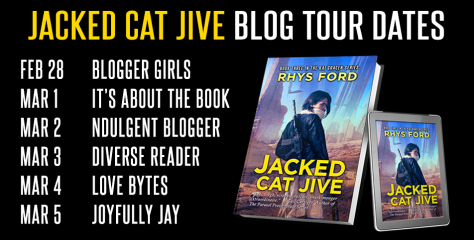 There was a roar. Distant and throaty. I recognized it. Or at least I thought I did. I could have been wrong. For all I knew it was a dragon sweeping down from Pendle to have an easy snack of Sidhe and bison before continuing on with its day of sex and fire. Bracing myself to be engulfed in flames, I tried to tighten my grip on the moving beast, digging for all I was worth. The herd veered, driven into a direction by some unseen threat then I heard the rumble again, a bassline of sound deep enough to rattle the teeth in the back of my head.

The bison heard it as well but they were intent on escaping the more immediate threat, the long-toothed cats chasing them. The grasses tore at my face and arms, and I closed my eyes, screwing them tightly shut before I lost one of them to a quick-slicing sheaf. I’d gotten lost in the drumming thump of the creatures’ hooves on the prairie’s packed soil then something shifted, changing the sound.

It was harder and the beasts felt like they were moving quicker. The air hitting me churned from a sun-warmed, grass-scented gusts to a cooler, steady brush, its soft kiss carrying a hint of salt with it. A few more strides and I realized I no longer was in danger of dying by a thousand tiny cuts. Risking a peek, I opened my eyes and found the herd surging down a stretch of black asphalt, a curving ribbon hugging the edge of the shoreline’s cliffs.

I didn’t know the area. Not well enough to know where the road led to or even how far it went. It couldn’t have gone too deeply into Pendle or Kai would have taken us up this way to Elfhaime, but perhaps the bison knew their hunters chasing them wouldn’t be able to keep up with them on a full, unhindered run.

Falling now wasn’t an option. Not on the rough ground beneath me, an ebony river of danger coursing a few feet below my left shoulder. With my right leg hooked over the creature’s back, I tightened my hold on its undulating torso, thankful its hindquarters were slimmer than its massive chest and shoulders. The creature probably didn’t appreciate my hold on it, bucking as it ran, hoping to dislodge the heavy parasite on its side but I wasn’t going to let go.

Or at least not until I was sure I was safe.

My shoulders ached from the strain of holding on and the terror clenching my guts as tightly as I did the bison wasn’t letting up at any time. Then the roar was back and I craned my head up, trying to see what I hoped was salvation coming up behind us. Burdened by my weight, the beast carrying me was slowing, unable to keep up its pace with me dragging it down. The rest of the herd thundered ahead of us, surging over the ribbon of road with its panoramic view of the ocean and an impending disastrous plunge into a lava field I didn’t think the creatures would be able to navigate.

What I saw lightened the pressure in my chest but at the same time, also drove knives through my belly. A deep purple car named after a bursting star roared up over a small hillock on the road chasing not only the herd but closing the distance on the small pride of lions hot on our heels.

The machine broke through the pride, sending the lions into an ungainly scatter but they’d gone too long, hunted too hard to give up their prey. My sturdy steed faltered, its legs knotted up or its hooves catching on something in the uneven road because its run broke, its body dipping dangerously to the side then upright again as it gained its footing. The car was catching up quickly, its engine screaming, much like a blessed lizard taking the night sky in full wing.

The mid-morning sun was to the right of the herd, blinding me when I looked up towards the mountain but the steel-grey sky grabbed at the car’s bright paint, turning it a silvery mauve against the black road. It lurched forward, its engine straining to catch up then the herd shifted again, driven to the right of the asphalt. The machine drew up next to the bison I was riding and through its open passenger window, I caught sight of the fierce concentration on Kai’s face as he maneuvered the car around the weaving animal I clung desperately to.

“What the fuck are you doing, lordling?” He yelled at me, his face half turned towards me but his eyes were firm on the road ahead. “Get off that damned thing and get into the car! You’re going to get yourself killed!” 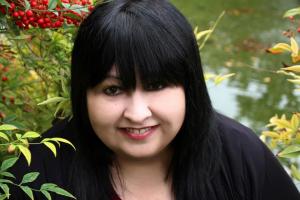 Rhys Ford is an award-winning author with several long-running LGBT+ mystery, thriller, paranormal, and urban fantasy series and is a two-time LAMBDA finalist with her Murder and Mayhem novels. She is also a 2017 Gold and Silver Medal winner in the Florida Authors and Publishers President’s Book Awards for her novels Ink and Shadows and Hanging the Stars. She is published by Dreamspinner Press and DSP Publications.

She’s also quite skeptical about bios without a dash of something personal and really, who doesn’t mention their cats, dog and cars in a bio? She shares the house with Harley, a grey tuxedo with a flower on her face, Badger, a disgruntled alley cat who isn’t sure living inside is a step up the social ladder as well as a ginger cairn terrorist named Gus. Rhys is also enslaved to the upkeep a 1979 Pontiac Firebird and enjoys murdering make-believe people.

Rhys can be found at the following locations:

This site uses Akismet to reduce spam. Learn how your comment data is processed.

Select all text in the box, copy, then paste into your widget.

(and some other stuff)

It’s About The Book

It’s About The Book